The Ultimate List of Private Medtech Companies to Watch (Updated)


Updated May 12, 2021 to reflect 10 new additions, based on recent analyst reports. We’ve also updated the existing companies on the list to reflect recent business developments.

From time to time, medtech analysts will call out companies in the private sector that they believe investors should be keeping tabs on. Here is our ultimate list, compiled from analyst reports, of private medtech companies to watch.

4C Medical is developing the AltaValve, a transcatheter mitral valve replacement (TMVR) platform designed to address mitral regurgitation (MR). It is the first transcatheter mitral regurgitation (MR) therapy that directly addresses MR without replacing the native mitral valve, thus preserving the native mitral annulus and left ventricle. 4C said its device is positioned supra annular to the leaking native mitral valve to stop the leak from entering the left atrium. Its atrial-only fixation ensures minimal disruption to critical cardiac structures within the left ventricle including the chordae tendineae and the left ventricular outflow tract, the company said. 4C Medical’s initial focus is to develop a therapy for MR, and subsequently for tricuspid regurgitation. The Maple Grove, MN-based company completed an over-subscribed convertible note financing in December 2020, which raised $10 million in gross proceeds.

Ablative Solutions is one of several companies helping to reignite the renal denervation market. The Peregrine System Kit is comprised of an infusion catheter and dehydrated alcohol. The device is used in a minimally invasive procedure with the goal of deactivating the nerves surrounding the renal arteries and thereby reducing blood pressure. In 2020, the Journal of the American College of Cardiology: Cardiovascular Interventions published six-month results from a European multicenter post-market study demonstrating the safety and efficacy of the company’s CE-marked Peregrine System Infusion Catheter. The study evaluated additional safety and performance of the Kalamazoo, MI-based company’s infusion catheter using a neurolytic agent (dehydrated alcohol) delivered into the space outside of the renal (kidney) arteries in 45 patients with systemic hypertension. Patients included in the study were taking at least three anti-hypertensive medications. At six months, mean 24-h ambulatory systolic blood pressure was reduced by 11 mm Hg, and diastolic blood pressure was reduced by 7 mm Hg. Medication adherence was monitored and remained stable throughout the study. The primary safety endpoint, defined as absence of periprocedural major vascular complications, major bleeding, acute kidney injury, or death within one month, was met in 96% of patients. 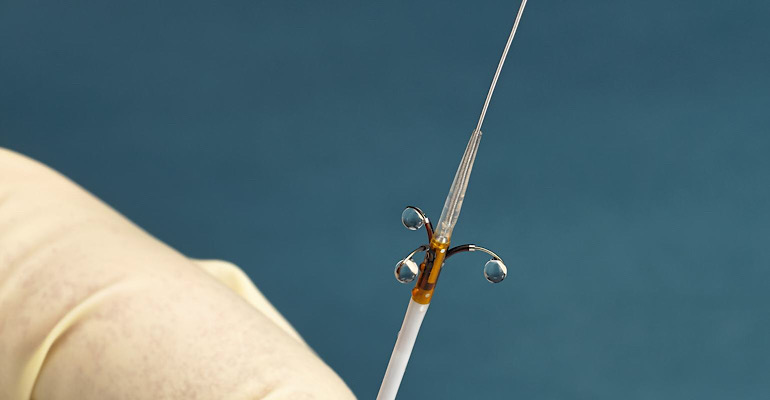 A new addition to the list, Memphas, TN-based Active Implants develops orthopedic implant solutions designed to complement the natural biomechanics of the musculoskeletal system, allowing patients to maintain or return to an active lifestyle. The company’s main focus is to provide clinical validation for the NUsurface Meniscus Implant, an “artificial meniscus” designed to replace one that is damaged or deteriorating. Ryan Zimmerman, a medtech analyst at BTIG, called attention to Active Implants in his April 5 report highlighting private medtech and digital health companies. Zimmerman noted that Active Implants filed its De Novo 510(k) in July. “Following clearance, we would expect Active Implants to begin a launch targeted at clinical trial sites with physicians who are familiar with the NUsurface,” the analyst wrote.

Mary Katherine Melroy, 40, was relieved when a mammogram in November 2020 determined that the lump she found in...

The companies on this list are set for huge growth in the coming 5 years and should be on...

[Startup Bharat] How Bhubaneswar-based Impact Health is looking to disrupt

India is the largest provider of generic medicines globally, and the Indian pharmaceutical sector supplies over 50 percent of...

The company, which launched on Monday, also got three new board members Heart disease has long been the number...

How Will Health Care In The U.S. Change After The Pandemic? : Shots

Chronic Care Management in the Time of COVID-19