Why Should You Retain Anthem (ANTM) Stock in Your Portfolio? – December 30, 2020

It is well-placed for growth, evident from its favorable VGM Score of A. Here V stands for Value, G for Growth and M for Momentum with the score being a weighted combination of all three factors.

This leading health insurer updated its guidance for the full year post third-quarter 2020 results. Adjusted net income for the current year is projected to be more than $22.30 per share compared with $19.44 for 2019. A solid outlook should instill investor confidence in the stock.

The company’s top-line improvement remains impressive, witnessing a 4-year CAGR of 7.1% (2015-2019) on the back of a premium rate increase and higher membership. In the first nine months of 2020, its operating revenues of $77 billion were up 9.8% year over year, aided by pharmacy product revenues.  We expect this solid top-line growth trend to continue, given the company’s strong business growth.

Anthem is now the fourth largest individual Medicare Advantage plan in the nation.

The company also witnessed a surge in its Telehealth visits, considering the current pandemic situation. Its live health online surpassed 1 million visits in early April. On its recent earnings call, management announced that growth in telemedicine is strong, especially for behavioral health services. We expect its telehealth medicine business to continue performing well on the back of rising demand.

Its series of tie-ups and buyouts shaped its inorganic growth story. Acquisitions helped the company boost its Medicare Advantage growth as well as add to its business portfolio. Anthem’s acquisitions of Missouri and Nebraska Medicaid plans of WellCare Health in January 2020 also added around 300000 Medicaid members under its coverage. The company’s Beacon Health buyout, the largest independently held behavioral health organization in the country, should further solidify its position in the space.

The company constantly deploys capital on the back of its solid capital position. It initiated cash dividends in early 2011 and has raised its dividend consistently ever since. It is also actively engaged in share buybacks, utilizing its excess capital to boost its shareholder value. The company’s cash flow from operations remains encouraging. Despite the prevalent choppy economic scenario, share repurchase activity was resumed in late June, considering the company’s sturdy solvency position. This should buoy investors’ optimism on the stock.

However, Anthem persistently incurred escalated expenses over the last several quarters, which drained its bottom line.

Shares of this presently Zacks Rank #3 (Hold) company have gained 17% over the past six months, outperforming its industry‘s rally of 13.3%. 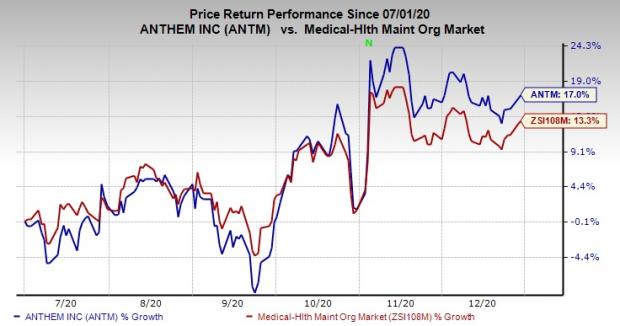 Other companies in the same space, such as Humana Inc. HUM, Molina Healthcare Inc. MOH and UnitedHealth Group Incorporated (UNH – Free Report) have also gained 4.2%, 15.8% and 16.7% in the same time frame. You can see the complete list of today’s Zacks #1 Rank (Strong Buy) stocks here.

The Hottest Tech Mega-Trend of All

Last year, it generated $24 billion in global revenues. By 2020, it’s predicted to blast through the roof to $77.6 billion. Famed investor Mark Cuban…

Read More:Why Should You Retain Anthem (ANTM) Stock in Your Portfolio? – December 30, 2020

In 2011, Eric Yuan left Cisco Systems (NASDAQ:CSCO) after realizing that customers were dissatisfied with the company's collaboration solutions....

Our MBAs have been working overtime trying to cover all of the companies entering the public markets, so our...

Good morning. The race to replace Angela Merkel heats up, the U.K. enters its next phase of reopening and...

3 GARP MedTech Stocks to Snap Up Despite Pandemic Woes

The pandemic-induced disruption had triggered severe economic volatility in the United States last year. However, the passing of historical...

Telehealth used in 30.1% of visits during COVID-19 pandemic

On Telemedicine in Sub-Saharan Africa – InsideSources